The primary goal is to be able to enable/disable modules and allow users to tailor the build to include the components that they need. Making the existing ns-3 into a modular system is mainly a job of reorganizing the source tree and modifying waf and the python bindings generation code.

Most of the changes related to the Stage 1 reorganization has been committed to http://code.nsnam.org/watrous/ns-3-dev.

The items that have been completed to date are:

The items that are unfinished but are proposed to be finished for this release are: 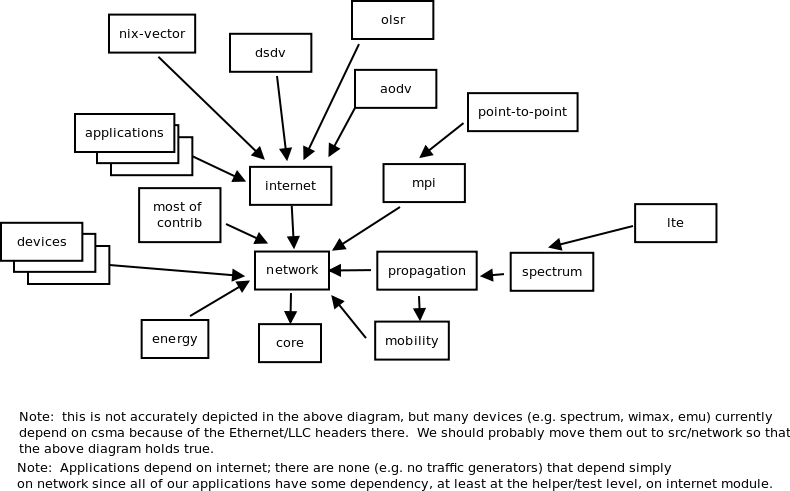 For example, try these commands:

The maintained version of the .ns3rc file in the ns-3-dev repository resides in the ns-3-dev/utils directory. The reason for this is if it were in the top-level directory, it would be prone to accidental checkins from maintainers that enable the modules they want to use. Therefore, users need to manually copy the .ns3rc from the utils directory to their preferred place (top level directory, their home directory) to enable persistent modular build configuration.

In ns-3.10, test.py hardcodes a number of examples to run in the test suite. In ns-3.11, we will add a new file "examples-to-run.py" in each module test/ directory, to tell the test framework which of the models should be run and under which test conditions. The syntax is the same as in current test.py; e.g. the src/spectrum/test/examples-to-run.py is given below: