The Boston university Representative Internet Topology gEnerator (BRITE) is a topology generation framework built with flexibility and extensibility in mind. By integrating this topology framework with ns-3, users will have the power to quickly and efficiently create large Internet topologies, while taking advantage of ns-3's simulation capabilities. 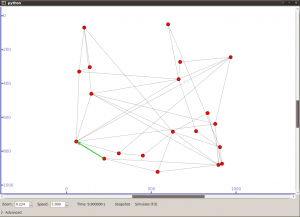 For modularity, the BRITE source code will be separate from the ns-3 code. Within the ns-3-allinone directory, the download.py script will take care of downloading and building the BRITE source code should the user choose to use BRITE. During the ns-3 build process, if BRITE is enabled, the BRITE code will be linked with the ns-3 code. Within the src/brite directory, the helper code, examples, test cases, and documentation will be provided.

Two repositories exist for BRITE integration with ns-3. First is the BRITE code itself, slightly modified to work with ns-3. Second is the ns-3-brite repository where the BRITE toplogy helper, examples, and test cases will exist.

The integration is nearly complete. Users can use the ns-3 BRITE interface to generate ns-3 topologies using BRITE configuration files. An ns-3 example has been provided in src/brite/examples to show its usage. Complete modularization to align with the new ns-3 modularization model remains, including integration with ./download.py to automatically download and build BRITE if enabled.

The first step is to download and build the ns-3 specific BRITE repository:

This will build BRITE and create a library, libbrite.so, within the BRITE directory.

Once BRITE has been built successfully, we proceed to configure ns-3 with BRITE support. Currently, ns-3-brite is not merged with the main ns-3 branch; therefore you must first download a custom ns-3 branch and build that:

Make sure it says 'enabled' beside 'BRITE Integration'. If it does not, then something has gone wrong. Either you have forgotten to build BRITE first following the steps above, or ns-3 could not find your BRITE directory.

By enabling the verbose parameter, the example will print out the node and edge information in a similar format to standard BRITE output. There are many other command-line parameters including confFile, seedFile, newseedFile, tracing, and nix, described below:

The brite-generic-example can be referenced to see basic usage of the BRITE interface. In summary, the BriteTopologyHelper is used as the interface point by passing in a BRITE configuration and seed file. The BRITE generated nodes and edges can then be accessed through this helper to create ns-3 nodes and edges.

Within the brite-generic-example, assigning IPs and creating applications are done fairly simply, as topology generation is the main topic of the BRITE interface. It is very likely that the user will need to change the way in which IP addresses are assigned or applications are installed.

A note on BRITE seed files

BRITE accepts a seed file to seed its psuedo-random number generator. It also spits out a new seed file after every run -- overwriting your old seed file -- in case you wish to randomize subsequent runs. Finally, it saves the most recently used seed file in a file called "last_seed_file." I didn't like the way this was done, specifically the overwriting bit, so I changed it in the ns-3 interface. You still pass in a seed file, but you also pass in another file for BRITE to write the new seed file. This keeps BRITE from overwriting your seed file. I believe this makes it easier to run the exact same simulation over and over. I think this is important. Finally, if you wish to overwrite the seed file each run, randomizing each subsequent run as before, you can simply pass in the same file name for the seed file and new seed file in ns-3.