Network Security Lab (NSL), University of Washington, Seattle has begun work on an generic energy model for ns3. The goal is to simulate an energy source and keep track of energy consumptions of various devices in the node. Current version focuses on radio energy consumption.

Energy modeling is a key element in wireless network simulation. In several simulation scenarios, the energy consumption at a particular node, or at a particular component of a node, is of interest. Further, energy consumption is an important metric for evaluating the performance of wireless network protocols. Also, if a protocol is energy-aware, i.e. its operation depends on the energy level, it cannot be effectively simulated without an energy model. An energy model has been implemented in ns2 (ns2 energy model) but is yet to be implemented in ns3. 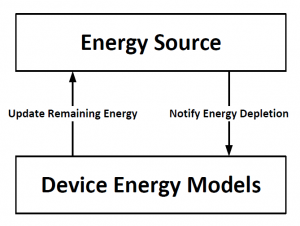 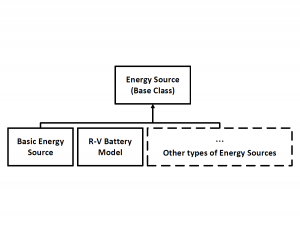 This is an abstract base class that provides interfaces for for updating/recording total energy consumption on the node. It also issues a notification when the remaining energy goes to zero. 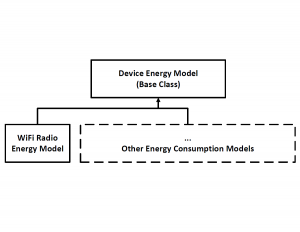 A typical child implementation of this class is the radio energy model class.

These states are defined in the WifiPhy class of ns-3.

The following code snippet installs an energy source (BasicEnergySource) and a WifiRadioEnergyModel onto each node.

The WifiRadioEnergyModel class fully supports the ns-3 built-in WiFi PHY class (YansWifiPhy). A sample simulation script of using the energy model is available in the "examples/energy" folder of ns-3.10.

Initial release of the energy model only includes implementations of a basic energy source and a basic radio energy model. However, developers can use the interfaces provided to model a wide variety of energy sources and devices.

The energy source base class provides the following interfaces:

Please see the BasicEnergySource class implementation for how the interfaces are used.

The device energy model base class provides the following interfaces:

Please see the WifiRadioEnergySource class implementation for how the interfaces are used.