The work will be divided into two main parts: 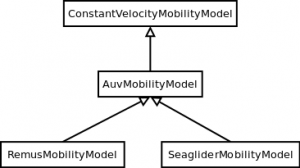 The API for the AUV simulator will looks like:

This interface will be implemented by the UanRemusMobilityModel and the UanGliderMobilityModel classes. Both model will use a constant velocity movement. The two classes will hold the navigation parameteres for the two different AUVs, like maximum gliding angles, maximum operating depth, maximum and minimum velocity. The relative helper class, will allow the user to instantiate the intended AUV type, to install an application container, as well as the uan communication stack (mac, transducer, channel).

Along with these two mobility models, it will be developed two Mobility Traces Generators, one for the Remus and one for the SeaGlider. The Seaglider's one, will implements the characteristic whale-like movement of the AUV, according to the documentation [7].

Basing on the Energy Source interface, it will be implemented a specific energy source for the two AUV classes (REMUS and Seaglider). This classes will reproduce the behaviour of the AUV batteries to give users an accurate model. This model can be naturally used to evaluates the AUV operating life, as well as mission-related power consumption, etc.

Basing on the Device Energy Model interface, it will be implemented a specific energy model for the WHOI <math>\mu</math>modem. The class will model real-world modem energy consuptions.

The connection point between the energy source and the energy model, will be the MAC layer. This layer, is the one responsible of using the two classes. Thus, the available underwater MAC protocols, will be modified to use the energy model class.

Work in progress. The examples will be added as soon as possible. Stay tuned!

My name is Andrea Sacco I was born 1985 and I live in Prato, Italy. I am currently finishing the Master of Science in Telecommunications Engineering at University of Florence (Italy), which I started in 2007. My Master thesis work is supervised by Prof. Romano Fantacci and Prof. Tommaso Pecorella, both from the University of Florence, and I've collaborated with Prof. Alvaro Suarez from the University of Las Palmas de Gran Canaria (Spain) during my Erasmus period (from 10/2009 to 3/2010). I am going to defend my Master Thesis on mid-July. I already have a Bachelor of Science in Information Engineering (curriculum Telematics) achieved in Dec. 2007 with a rank of 107 over 110.