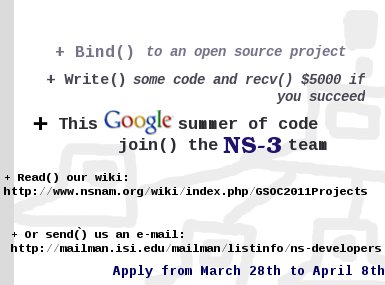 ns-3 has been in development since 2005 and has been making quarterly releases since June 2008 (our last release was ns-3.10 in January 2011). ns-3 is replacing the popular ns-2 tool which was developed in the 1997-2000 timeframe but became out of date and unmaintained. The tool is coming into wide use; our web server logged almost 71000 successful downloads of our released software between January 2010 and January 2011, and we have a users mailing list of about 900 members now averaging 200-300 posts per month.

Our GSOC organizational admin is Lalith Suresh and our backup org admin is Tom Henderson.

The following are project ideas which the ns-3 team has identified as important and is most interested in working on as part of the 2011 Google Summer of Code. GSoC applicants are however free to propose their own ideas. In addition, please note that these ideas are not limited to Google Summer of Code, anyone is welcome to work on them. Please email the ns-developers list if you have an idea that you'd like to work on. GSoC applicants are encouraged to look over this list, pick one that especially interests them, think about it, and discuss potential approaches on the ns-developers list. Previous experience suggests that the more you discuss and refine your proposal on the mailing list beforehand, the more stronger a proposal it will develop into, and the higher your chances of being ranked high.

Mentors: TBD (Note: This project is not yet confirmed for GSoC 2011)

Mentors: TBD (Note: This project is not yet confirmed for GSoC 2011)