Difference between revisions of "GSOC2013WAVE MAC"

Vehicular networks called VANETs are an important area of research in the field of Intelligent Transportation Systems (ITS). A wide range of safety and infotainment systems have been envisioned using this technology. Cooperative active safety systems, urban traffic control and the study of the inherent communication protocols are currently drawing great research interest [8-9]. The protocol stacks dedicated for VANET include WAVE from US IEEE, C2C-CC from Europe and CALM from ISO. Note that: this project is mainly focus on MAC layer of WAVE architecure described in section 2.2 and 2.3.
VANET simulations are the most practicable methodology to study vehicular networks. First, it is the only viable solution to evaluate applications in large-scale scenarios with thousands of vehicles. Second, it allows for the control of parameters that are usually unavailable in real experiments such as traffic lights algorithms. Third, it provides a cost-effective solution for trying new applications or simulating accidents [8]. The challenge of VANET simulations mainly includes network simulation, vehicular mobility, channel model and large-scale simulation [11].

802.11p is an amendment of the IEEE standard 802.11, specifying extensions to 802.11a, adapting it to VANET communications in the 5.9 GHz band, fitting the VANET requirements of high mobility and short-duration communications. This specification includes: functions and services required by stations to operate correctly and to exchange messages without joining a BSS; signaling techniques and interface functions used by stations to communicate outside the context of a BSS. 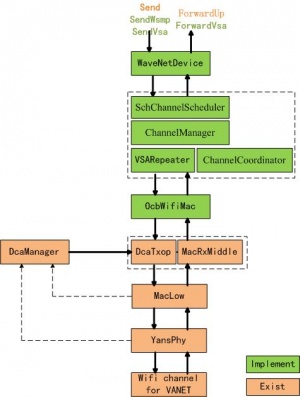 Since 1609.4 has already been implemented in some other simulations[5-6], this project will adopt some ideas from these papers as well as take the discussion among ns-3 developers[2-3] as the guideline for implementing. A subclass inheriting from NetDevice named WaveNetDevice will be defined, composed of (a) OcbWifiMac mac defined in 802.11p, (b) WaveNetDevice mac extension dealing with functions of 1609.4 management and data plane,(c) subcomponents in 1609.4 including ChannelCoordinator, ChannelManager, SchChannelScheduler and VSARepeater.

And the most important point is that it’s an iterative process like Extreme Programming. Because this is a light project, we can develop simple functions, work well, then go back to develop a little more complex and accurate.

When programming codes, test codes meanwhile. And testing approach is mainly based on log functions, examples and test suits. According to the Test part of ns-3 manual, it includes:

According to the ns-3 architecture, deliverables are in a new module named WAVE, including Model, Doc, Helper, Binding, Test, and Examples.

Based on the GSoC 2013 timeline, there are totally 12 weeks. The following is the plan of this project (Implementation not only means source codes, but also contains relevant test suits, examples and documents):

July 29 - August 2:submit source files including ocb-wifi-mac.h/.cc, wave-net-device.h/.cc, ocb-wifi-mac-test-suit.cc, simple-802.11p-example.cc. And submit a document about partial technical details and usage for VANET researchers and a relatively simple introduction of WAVE for other users

How to use wave device ?

How to use VSA frame to send management information ?

Normally the up layer can send packets in different protocols via 802.11 data frame, like ipv4 and ipv6. However, actually wifi know nothing about these differences, because this work has been done with LlcSnapHeader with protocol field. So if up layer wants to send different management informations over 802.11 management frame (of course nobody can prevent someone just wants to send management information over 802.11 data frame), how can we do? The 802.11 and 802.11p can allow the up layer send different information over Vendor Specific Action management frame by using different OrganizationIdentifier fields (now only support 3 and 5 bytes according to the standard) to identify differences.

If you want to use wave device to send VSAs under multi-channel environment.Usage:

Is this model going to involve vehicular mobility of some sort

Is your model going to use different propagation models

Refer to the first issue, some more realistic propagation models for vehicualr environment are suggested and welcome. And some existed propagation models in ns-3 are also suitable. Normally users can use Friis,Two-Ray Ground and Nakagami model [7].

What specifically is different about your mac other than wildcard BSSID

are there any vehicular application models to drive the code

Any previous code you think you can leverage

This project will provide two netdevice. First is normal 802.11p netdevice which uses new implemented OcbWifiMac, this is very useful for those people who only want to simulate route protocols or up protocols for vehicular environment and do not need whole WAVE architecture. For any previous code, my suggestion is to use Wifi80211phelper with little modification or just set ad-hoc mode with 802.11a 10MHz (this is enough to simulate main characteristic of 802.11p). The second netdevice is 1609.4 netdevice which providers some methods to deal with multi-channel operation. This is part of whole WAVE architecture and provides service for up 1609.3 standards.

Why here are two kinds of NetDevice

In wave module, actually here are two device, one is 802.11p device which is the object of WifiNetDevice class, another is wave device which is the object of WaveNetDevice class. An "802.11p Net Device" is one that just runs the 802.11p extensions (channel frequency = 802.11a 5.9GHz, channel width = 10MHz, single instance of OcbWifiMac, and specific EDCA parameters). A "WAVE Net Device" is one that implements also 1609.1-4 standards based on 802.11p, and now we are focusing only on 1609.4 modeling aspects (multi channel). The reason to provide a 802.11p device is that considering the fact many researchers are interested in route protocol or other aspects on vehicular environment of single channel, so they need no multi-channel operation and WAVE architectures. Besides that, the European standard could use 802.11p device in an modified ITS-G5 implementation (maybe named ITSG5NetDevice).

Thanks for all comments from Guillaume Rémy, Lalith Suresh, Tommaso Pecorella, and Tom Henderson.