The architecture of SAFE provides for the use of mechanisms to determine when metrics estimated through simulation have reached steady-state. Although well known, the initialization bias problem hasn't been addressed satisfactorily in the domain of network simulation. Few published research studies have taken steps to exclude samples generated during model transients from their statistical data analysis. Among other researchers who have identified the relevance of initialization bias in network simulation, "Perrone, Yuan, and Nicol [2003]":http://redmine.eg.bucknell.edu/safe/attachments/16/perrone2003.pdf report the significance of avoiding the use of samples from transient in the computation of statistical estimators for metrics of interest.

SAFE enables one to hook up a source of samples to an analysis module, which determines on its own whether the sample data is "in transient" or in steady-state.

The development of _steady-state detectors_ for SAFE is looking at a broad range of publications that will culminate in the identification of sound data analysis methodology. SAFE will use the information provided by steady-state detectors to implement data deletion in the samples collected thereby avoiding initialization bias.

This work is at an investigation stage. We are currently going through the literature to identify algorithms that will be suitable for use in SAFE steady-state detectors. 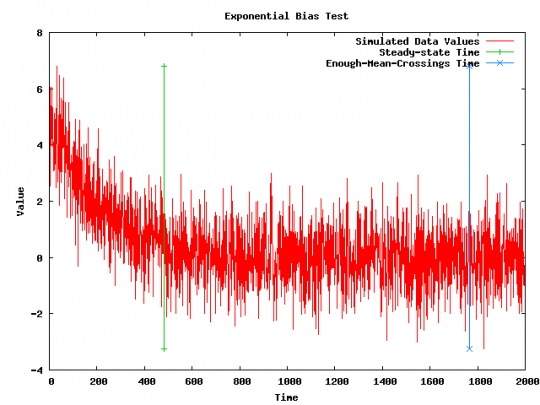 Algorithms to Try (In order that they should be tried)