Note: this page is not internally consistent at the moment. It will be updated once there is some further discussion on the May 2014 developer meeting discussions.

directly the Start/Stop methods of other objects.

directly by a user. Now, the question is: what are the expected user-visible semantics of calling Start/Stop on each of these objects? Mathieu Lacage

We reviewed Vedran Miletic's latest patch for providing Failure/Repair capabilities to Objects, and the wiki page concerning the design goals and previous agreements.

Questions again arose as to what we are trying to model. We list below a few illustrative use-cases that were discussed:

Peter emphasized the clarity that a state diagram might lend to the discussion. We reached consensus on one such diagram (attached). It seems like we need to distinguish between Stop/Restart and Sleep/Wake, and probably provide these as separate capabilities (that may be combined).

In this approach, Sleep/Wake would probably be used in energy-aware contexts, and would mainly correspond to the behavior that event processing (packet reception and generation) would be suspended while in a sleep state, but most object state would be preserved in the transition. However, Stop/Restart would restore the object to its original post-construction state, and some objects may just be stoppable and not restartable. If an object were to provide Restart(), it would need to do some additional work to make sure that all post-construction state was cached upon first initialization.

We discussed the implementation approach. In order to optionally provide this such that the trait is queryable via GetObject(), there seem to be two approaches:

We suggest that 2) would be preferable to avoid TypeId changes. These classes StartStopFunctionality and SleepWakeFunctionality could also be used (mixed in) for non ns3::Object classes if desired.

We had some discussion about the difficulty in automating the stopping of associated objects, such as whether calling stop on a Node should stop its motion or not (it may depend). We initially considered that, we ought to focus on just stopping objects individually and not trying to have the Stop() propagate to other aggregated objects. However, in the example use case of a Node running out of energy then later awakening, we may need to in fact to provide a Node-level Sleep/Wake that calls into the constituent objects. So we concluded that we ought to perform a node-level example.

We discussed specifically that handling of Sleep and Stop events may need to be handled in different ways by any mobility models; there may be some scenarios where energy depletion results in motion pausing or continuing, depending on the desired effect. So, it is not necessarily the case that Node::Stop() or Node::Sleep() should cause those operations to occur on the mobility model; we'll need to be able to handle different policies. This affects the previously-held assumption that Node::Stop() should stop all aggregated objects.

A final note was that there were some comments in the wiki noting the need to call "ScheduleWithContext()" upon restart events, and people were unaware of the status of the threaded scheduler, so we agreed to look into this. 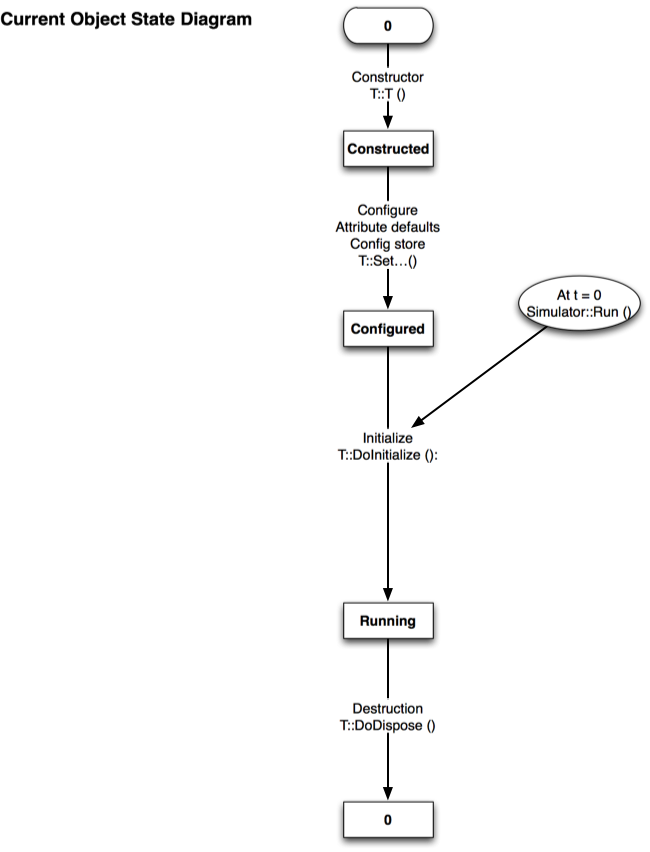