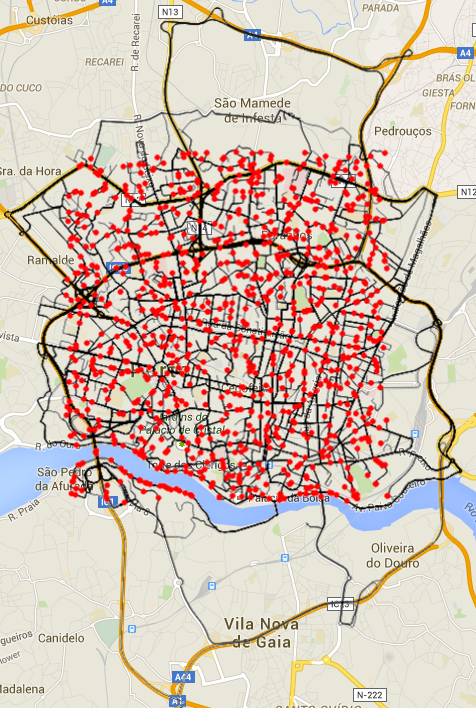 My code can be found here: https://bitbucket.org/TiagoCerqueira/routesmobilitymodel . This includes a ready-to-use version of ns-3.23 with my module.

Additionally, the user can also download a stable release of the module. To use it, the user must then copy the folder to the src/ folder of ns-3.

In order to provide the users with a reliable module, the team developed a test case to test for the time placement of waypoints and the conversion between geographical and cartesian coordinates. The code is available in the test folder of the module.

This tutorial is concerned with the installation of the RoutesMobilityModel and its dependencies in a ns-3 installation. The steps described in the tutorial were successfully applied to ns-3.23 and ns-3.24.1. A video version of this tutorial can be found here:

The RoutesMobilityModel depends on curlpp, xerces-cpp and GeographicLib. If the Linux distribution offers packages for these libraries, as is the case for example in Ubuntu, it is sufficient to install the three packages, and it is possible to skip directly to the last step.

The first step, whose commands depend on the Linux distribution in use, regard the installation of packages needed to compile curlpp, xerces-cpp and GeographicLib. The packages to be installed are:

The next step is to install the GeographicLib. This is the library responsible for performing the conversions between Geographical coordinates and Cartesian coordinates

After that we need to install the curlpp library, which is responsible for querying the Google Maps APIs, through HTTP.

Finally, it's time to install the xerces-cpp library, which is the library responsible for parsing the XML responses from Google

Afterwards, the compiled libraries have to be added to the "path": Add these two lines to ~/.bashrc (or ~/.bash_profile, in some distributions).

In some distributions, the paths may vary slightly. The user should first run the ldconfig command, in order to determine where the libraries are installed. For example: ldconfig -p | grep $(LIBRARY) Finally, for the changes to take effect, the user should run:

Installation of the RoutesMobilityModel module itself:

If the system does not have a working ns-3 installation, it is necessary to download and uncompress it, creating for example a "ns-3.24" directory. Download the module from the project's repository (https://bitbucket.org/TiagoCerqueira/routesmobilitymodel) and move it to ns-3's src/ folder:

Afterwards, we add the API key to the file mobility-service-interface/conf/api-key.txt (create if necessary).

Finally, it's a matter of configure/build/run an example: