Network Security Lab, University of Washington, Seattle has begun work on a wireless interference (jamming) model for ns3. The goal is to enable researchers to use ns3 to study jamming and its mitigation methods.

Interference (Jamming) in wireless networks is an important example of malicious attacks in wireless networks. It is achieved by deliberate transmission of radio signals to disrupt the communication in a wireless network by decreasing the signal-to-interference-noise ratio (SINR). Jamming leads to corrupted packets at the receiver, which results in a lowered throughput.

This model focuses on modeling the intelligence layer (eg. deciding when and what packets to jam/interfere, deciding whether a node is being jammed/interfered, deciding how to mitigate jamming/interference). It uses existing channel (interference) model to simulate interference/noise in the wireless channel, and existing PHY models to send packets. Our design goal is to abstract the underlying wireless PHY layer protocol from the intelligence layer, so that the same strategy (jamming or jamming detection/mitigation) can be applied to any existing/developing ns-3 wireless PHY layer protocols without any change. 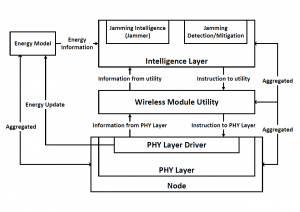 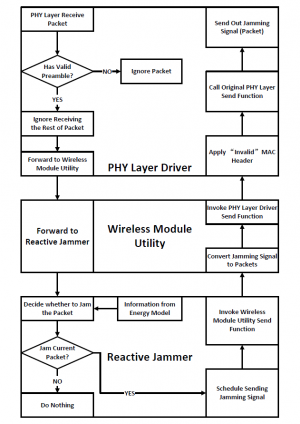 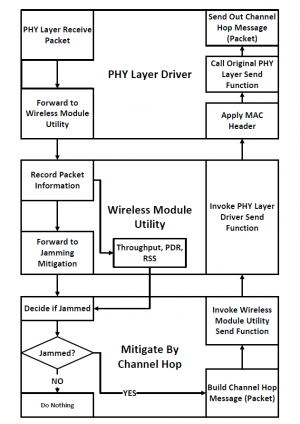 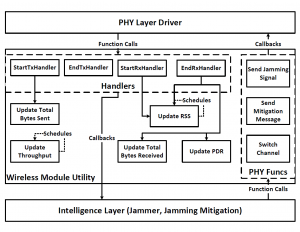 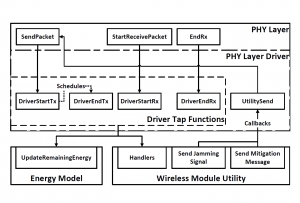 Modifications of the PHY layer is required to pass information to/from the wireless module utility. Currently, we provide a modified YansWifiPhy class called NslWifiPhy as an example of how PHY layer driver can be implemented.

PHY layer driver are usually private functions. It typically (based on implementation of YansWifiPhy) include the following functions: