The project is divided into three major blocks:

Initial cell selection
UE mechanism to automatically determine the best eNodeB to attach to, based on RSRP.

The UE measurements block can be said as the core piece of the project, because the other blocks are dependant on it. For instance, initial cell selection utilizes the measurements of RSRP gathered during UE's idle state. While handover algorithms will request certain measurements and consume them during UE's active state.

The development will be conducted using the latest revision of LENA (Mercurial repository) as the code base. The reason behind this decision is the fact that several important features are not yet available in ns-3-dev repository at the time the project begins. For example, LENA M6 was released with some supports of UE measurements and automatic handover, which are essential for the project.

Despite the dependencies, each of the project blocks are designed to be cohesive by itself. Hence the project will focus on one block at a time, and then move on to the next block. The development of each block includes the actual code, test code, documentation, and code review. Progress will be published in frequent basis to the public repository.

The following pseudocode illustrates the procedure outlined above.

After acceptance notice is announced in the beginning of Week 22 (May 27), the project will enter the community bonding period, which consist of the following activities:

Then at Week 25 (June 17) the coding phase will begin. The first half of the project is planned as follow:

Week 31 (July 29) will be reserved for mid-term evaluation. After that (August 5), the second half of the project will begin as below:

Week 38 (September 16) will be the pencil down week, and Week 39 (September 23) will be allocated for the final evaluation.

Reports on progress are divided into weekly, mid-term, and final reports. The weekly reports will be available in this section after the end of the corresponding week.

The community bonding period has delivered the preliminary design documentation of UE measurements. This is split into design, user, and testing documentation. 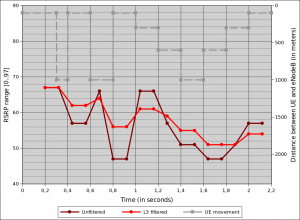 Trace of RSRP perceived by the UE during the UE measurement piecewise test case 1.

This week is the first week of the first coding phase. It has delivered the following: 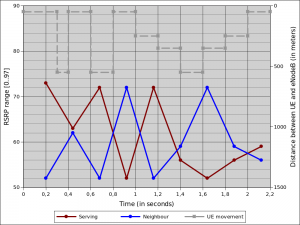 Trace of RSRP perceived by the UE during the UE measurement piecewise test case 2.

This week is the second week of the first coding phase. It has delivered the following:

This week is the third week of the first coding phase. It has delivered the following:

There is an issue with time-to-trigger implementation this week. The previously planned implementation turns out producing behaviour not in accord with 3GPP specification. Time-to-trigger is supposed to delay the reporting trigger by t ms, but the previous design unexpectedly rounded t to the multiplies of 200 (i.e. the trigger point becomes dependent to the rate of measurement reports from PHY layer). Because of this, I rewrote the idea and then attempted to rebuild it, but did not manage to complete in time. Thus time-to-trigger spills off to the next week.

This week is the fourth week of the first coding phase. The second block of project, initial cell selection, is started here. This week has delivered the following:

Hence, the UE measurements block are now ready to be reviewed as a whole.

Regarding initial cell selection, the implementation of System Information Block Type 1 (SIB1) is scheduled this week. The development and discussions with mentors are currently ongoing. While going through the discussions, I have learned that there are several technical assumptions about initial cell selection in LTE and impact to existing code that I was not aware of. Therefore I decided to rearrange the implementation idea before moving further.

This week is the fifth week of the first coding phase. It has delivered the following:

The introduction of cell search and initial cell selection has impacted the existing code in LTE module. Firstly, there has to be new helper functions to control these features, which also have to be included in user documentation. Secondly, at least there are one test suite (lte-pathloss) and one example (buildings-pathloss-profiler) which fail and have to be fixed. These will be taken care of next week.

This week is the sixth week of the coding phase, and also the last week of the first coding phase. The second block of the project, initial cell selection, ends here. This week has delivered the following:

This week is the mid-term evaluation week. The project progressed as follows: 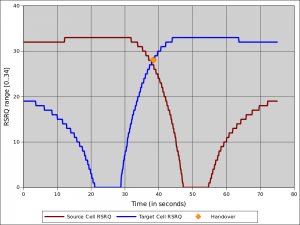 This week is the start of the second half of the project. The development of the handover algorithm block is handled during this time. This week in particular has delivered the following:

As a result of this week's development, the existing Neighbour Relation Table (NRT) functionality has been impacted. This function had utilized the Event A4-based measurement reports which have been shared together with the built-in handover algorithm. This dependency will be sorted out next week, by converting the NRT to a simplified version of Automatic Neighbour Relation (ANR) function. 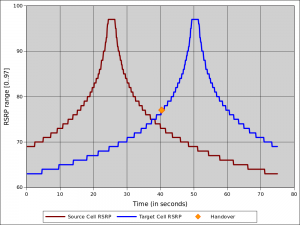 This week is the second week of the second coding phase. It has delivered the following:

This week is the third week of the second coding phase. It has delivered the following:

As scheduled, all standard deliverables have been completed by the end of this week. The remaining 3 weeks of development time in the project will be used to develop some selected future deliverables. Development continues as usual in the main GSoC repository.

This week is the fourth week of the second coding phase. It has delivered the following:

The design of handover failure scenarios (including Radio Link Failure and RRC Connection Re-establishment) was planned for this week, but then got postponed because of a change of priority.

This week is the fifth week of the second coding phase. It has delivered the following:

During this week, the project decided the upcoming tasks for the upcoming 3 weeks of project timeline that remains, which are listed below:

This week is the last week of the project's coding phase. The attempt to merge with the ns-3-dev and lena-dev encountered a problem of 2 test suites failing. These test suites are the lte-cell-selection (new in GSoC) and the lte-phy-error-model (not part of GSoC).

This week is the pencil-down week. Coding is supposed to stop during this week and work continues on documenting and wrapping up the project.

This week has delivered an addition to the LTE module User Documentation on executing a small simulation campaign using the new handover models developed during the project. It is a step-by-step guide to configure the existing lena-dual-stripe example program, executing it with different configuration parameters, and post-processing the simulation output using GNU Octave. The section concludes by presenting the results (average user throughput, average SINR, and number of handovers).

One bug is also found and fixed during the execution of simulation campaign. The bug occurs when initial cell selection and RSRQ-based measurement configuration are used altogether, which makes the latter reporting incorrect values.

This week is also the last week of the project. In other words, the project is officially completed. In spite of this, the project will continue expecting comments and feedback from the code review process which is currently ongoing. This will continue until the code is merged into both lena-dev and ns-3-dev repositories.

Several other development ideas were proposed in the beginning of the project. However, after several discussions with mentors, these ideas are deferred as low priority. They are listed below for future reference.

They are listed below for future reference and for re-prioritization by the time the standard deliverables are completed. Some of these ideas will be developed on the last 3 weeks of the project's coding phase, while the rest will spill outside the scope of the GSoC project.

This subsection explains the reasoning behind the addition of 1 µs delay before every submission of a measurement report from UE RRC to eNodeB RRC. To be more specific, this delay is the constant UE_MEASUREMENTS_REPORT_DELAY defined in lte-ue-rrc.h, which is used before calling the LteUeRrc::SendMeasurementReport function. 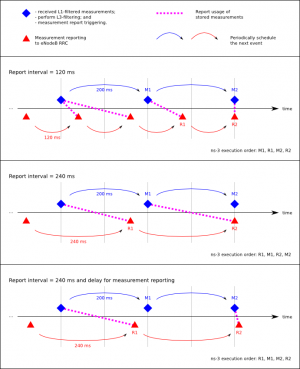 Refer to figure on the right for 3 sample cases of UE measurements. Note each purple line is showing that the measurement report (red triangle) uses the previously stored measurements from the latest layer-3 filtering (blue diamond). Also note the ns-3 execution order for each case.

Case 1 and 2 have one thing in common: there is a time in the end where M2 and R2 are scheduled at exactly the same time. Case 3 is also similar, except that there's a tiny delay for R2.

Now, Case 1 has the correct purple line placement, but Case 2 does not. In Case 2, R2 should have used M2 instead of M1. This is due to the fact that R2 is executed before M2, so M2 does not have the chance to update the stored measurements.

Then why this issue does not happen in Case 1? Because in Case 1, the scheduling of M2 (i.e., M1) occurs before the scheduling of R2 (i.e., R1). Thus when M2 and R2 end up in the same time slot, ns-3 picks the one which is scheduled first, which is M2. But in Case 2, what happens is the other way around: R1 occurs before M1, therefore R2 is executed before M2. And that's why R2 still uses the old M1.

Case 3 is the attempt to solve the issue with Case 2. A tiny delay is added to every red triangles to ensure that red triangles are always executed after blue diamonds finished updating the stored measurements.

This issue is verified in the lte-ue-measurements-piecewise-2 test suite. Case 2 and 3 are represented as the first test case named "Piecewise test case 2 - Event A1 with very low threshold".